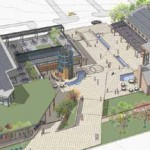 For over ten years, beginning as early as the 2003 Comprehensive Zoning process, the River Hill Village Board (RHBOD) has consistently advocated for the creation of a master plan for development along the MD 108 corridor between Trotter Road and Guilford Road. It has been the Association’s goal to recognize the history and landscape of the area while improving the transitions from the more rural agricultural and residential uses at the ends of the corridor to the commercial core. Central to this goal has been the creation of a sense of place, improvements in traffic flow and safety, and enhanced connectivity along the commercial core and between the more densely populated residential areas and local businesses. Therefore, the River Hill Village Board recently provided input to the County’s Department of Planning and Zoning (DPZ) in support of the streetscape, architecture, and signage design guidelines contained in the proposed Clarksville Pike Streetscape Plan and Design Guidelines document.

In its feedback to DPZ, the Association stressed the importance of the following:

Sheppard Lane Intersection Improvements
• Members of the community sent 100+ emails to the Association requesting changes to the Design Guidelines at the Sheppard Lane/MD intersection. Given the significant community concern, the RHBOD strongly encourages additional discussion between SHA, the County, Village and affected residents, schools, and landowners along the corridor. The Association has asked that a perpendicular intersection, or other similar alternative, be considered for inclusion in the design document. It is the Association’s expectation that adequate community outreach be conducted prior to implementation of any changes at this intersection.

Improved Connectivity
• The RHBOD fully supports the installation of a protected, multi-use pathway along MD 108, crosswalks, and other related safety improvements. Walkability and bicycle accessibility particularly across MD 108 are a high, short-term priority for our community as indicated in the Association’s Village Center Community Plan.
• The Association supports the concept of “long term inter-parcel connectivity and parallel public streets to create a better grid” and consolidation of access points in the commercial area between Auto Drive and Linden Linthicum Lane.

Creating a Sense of Place
• The Association believes it is important for this segment of the MD 108 corridor to function as a transition zone between the more densely developed eastern portion of Howard County and the more rural west. Also of importance is the maintenance and enhancement of the transitions between the zones that exist along the corridor.
• The Association supports the retention of visual connections to the roadway’s rural and agrarian roots. This includes the long term retention of existing agricultural and wooded views including, but not limited to, the view sheds identified in the draft Design Guidelines. The rolling farmland between Linden Linthicum Lane and Sheppard Lane is of great importance to the Clarksville-River Hill community. Future development in this area must respect and preserve these views.
• The Association supports the architectural design recommendations, structures, and uses that reflect the area’s cultural and historical importance as a gathering place for the local farming community.
• The Association identified the “H” tree, the evergreen tree located between the Linden Linthicum United Methodist Church and the River Hill Garden Center, and the historic mile marker as significant community landmarks that must be retained.
• The Association supports the use of physical and visual buffers between competing land uses when transitional uses do not, or cannot, be incorporated. The Association identified several areas where buffers between residential and commercial uses are critical, including the section between Great Star Drive and Clarksville Elementary school.

DPZ’s proposed Design Guidelines document is an important step toward the community’s long term goals. The RHBOD has urged DPZ to integrate the comments from the community and affected stakeholders in a transparent, timely, and efficient manner in order to not lose ground as new development projects are submitted. The Association has also requested that the County make the resources available and work with the State Highway Administration and others to obtain the approvals and funding needed to achieve both the short term and long term improvements. To view the proposed Design Guidelines click here. To view the Association’s comments in their entirety click here.