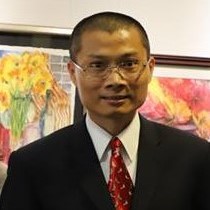 The River Hill Community Association’s Board of Directors thanks Chao Wu for his service to our community as the Columbia Council Representative and as a Columbia Association Board Member. He begins his new endeavor as an elected official for the Howard County Public School System’s Board of Education where he was sworn in on December 3.

Dr. Chao Wu is a scientist, engineer, programmer, and community activist. He was born and grew up in Hubei, China and now resides with his wife and two young children in Clarksville, MD. He became a US citizen in 2016.

In 2015, Dr. Wu was elected as the Columbia Council Representative from the Village of River Hill. As the River Hill representative, he was elected to the Columbia Association (CA) Board of Directors, a volunteer position. CA is the umbrella organization which oversees the planned community of Columbia, a thriving unincorporated community of more than 100,000 residents and 1,200 commercial properties. As a Director of CA, Dr. Wu oversaw a non-profit, community-focused corporation which manages, operates and maintains 42 community and sport facilities, over 3600 acres of open space, 94 miles of pathways, and 3 lakes. In Fiscal Year 2019, CA has combined operating and capital budgets of $82M. In 2015/2016, Dr. Wu served as vice-chairperson and then chairperson for the Planning and Strategy Committee of the CA Board and he was a member of the CA Board Operations Committee and CA Audit Committee for several years.

Fellow CA Board Member, Andy Stack, said, “Chao is the first Chinese American elected onto the Board of Directors at CA. Due to his background, he brought a unique perspective to the CA Board. As a CA Director, Dr. Wu has been actively serving all CA residents, listening to their concerns and addressing their issues while ensuring that the concerns of the Chinese American community were heard. I have enjoyed working with Chao on the CA Board and wish him success in his new position on the Howard County Public School System Board of Education.”